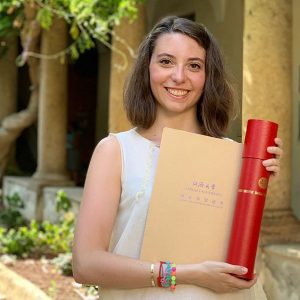 Eng. Archt. Caterina Pietra, since October 2018, is PhD candidate in “Design, Modeling and Simulation in Engineering”, XXXIV cycle, at the Department of Civil Engineering and Architecture (DICAr) of Pavia University – Director. Prof. Alessandro Reali, with a scholarship funded by the university itself, and collaborates with the Urban Project Laboratory (UPLab), whose director is Professor Roberto De Lotto.

In June 2018, she obtained a Double Master Degree in Building Engineering and Architecture from Pavia University and in Architecture from Tongji University in Shanghai where she discussed the thesis entitled “Heritage Conservation and Urban Regeneration: New Challenges in the Industrial Context along the East Bund of Shanghai”, supervisors: Prof. Roberto De Lotto and Prof. Zhang Peng.

As part of the VI cycle of the Double Degree Program, she spent the entire academic year at Tongji University in Shanghai (A.Y. 2017/2018), at the College of Architecture and Urban Planning – CAUP.

From October 2019 to December 2019, she has spent a PhD Research Period at the College of Design and Innovation of Tongji University in Shanghai, under the supervision of Professor Tiziano Cattaneo.

According to what is defined by the World Health Organization, a Healthy City represents a process and not a condition; this means that potentially any city or community can be considered healthy, regardless of its current health status. However, urban and territorial development programs nowadays are strongly influenced by the main global changes related to climate, environment, technology and demography. Urbanization is important that takes into consideration these variables in a global way in order to offer greener, safer and healthier spaces, adapting local cultural diversity and promoting social inclusion.
Therefore, the basic idea of the research consists in combining and comparing information related to the structure of the city, which are organized trough different complex layers, to evaluate how they can be useful for defining simulation procedures on the condition of a certain urban fabric and understanding whether they can be applied to similar contexts. The in-depth study of a non-homogeneous and multi-variable set will be fundamental to reach a systematization of data and contextual definition, with the greatest possible precision (in terms of scale of intervention), of urban regeneration strategies for the existing city that aims to increase the descriptive parameters of the “Healthy City”.