“City campus” is a specific urban structure characterized by the maximum expression of the system of relationships (social, settlement, economic, political) that can exist between university and administrative / political institutions. On the city campus, a density and number of interactions is experienced that are not evident in different settlement models. The Italian most famous cases are Bologna, Padua, Pisa and Pavia.

Significant aspects include the singularity of each context and the actual impossibility of defining a unique spatial scheme for all city campuses: the city/university relationship does not always depend on a real planning intention. University settlements are often the result of contingencies, temporary opportunities dictated by national laws and not of effective planning at the regional and municipal scale.

The awareness that the University is conditioned by the social system in which it acts and conditions its development, makes the planning and designing of university organism’s elements really fundamental. The need for a coordinated territorial planning action among all the different social actors arises in a context of shared objectives. In addition, the continuous and rapid changes in socio-economic context require flexible approaches that can be able to adapt quickly to the evolution of the relationships among these different systems. 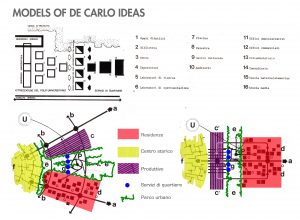 De Carlo’s new, modern and wide-ranging vision clearly emerges from the plan drawn up from 1970 to 1974: strongly inspired by political and social values, based on the intention of creating a network of connections between university and city, between students and residents, through a continuous exchange of experiences and even physical and emotional contacts. University and city had to synergistically create open multifunctional structures that could be lived by students, professors but also by citizens in order to avoid the mutual isolation.

The De Carlo’s main idea aim to a complete integration between the urban system and the university system: integration not only in the macro-location characteristics, but in the idea of integrated management of the territory that overcame the barriers of the private/public issue towards a vision of functional and social mix following the historical city center model.

In Pavia, the urban location structure was based on a Multipolar Model, with the specific aim to involve the entire city in the organization of the university system: in particular, all the officies and main university structure are organized in Poli, whose location in the city depended strictly on the roles and services offered. De Carlo has defined three distinct Poles: Central Poles (historical center with a humanistic vocation, and Cravino area in the west part with a scientific and hospital vocation), Peripheral Poles, and Intermediate Poles. This type of organization combines the campus characteristics, as a model that offers autonomy and spatial concentration to the university system, and those typical of the widespread university model, which aim instead to avoid the isolation from the social context.