For millennia, the devastating consequences of natural hazards have been considered as ‘acts of God’, demonstrations of superior forces to any possibility of reaction and intervention by human beings. Earthquakes, droughts, floods and storms are natural hazards, but unnatural disasters are deaths and damages resulting from the interaction with human being, goods and human activities (The World Bank, 2010). “Whether it be an earthquake or a tsunami, a cyclone or floods, the risk of a natural event turning into a disaster always depends only partly on the force of the natural event itself. The living conditions of the people in the regions affected and the options available to respond quickly and to provide assistance are just as significant. Those who are prepared, who know what to do in the event of an extreme natural event, have a greater chance of survival.” (WorldRiskReport, 2011).

In 2015, the UN adopted the first major agreement of the 2030 Development Framework, the Sendai Framework for Disaster Risk Reduction 2015-2030 (SFDRR) in Sendai City, Japan. It aims for “the substantial reduction of disaster risk and losses in lives, livelihoods and health and in the economic, physical, social, cultural and environmental assets of persons, businesses, communities and countries” and recognizes the important role cities and local governments in achieving this goal.

Responsible and advanced urban planning represents a great example of a non-structural, long-term, stable and exposure-vulnerability oriented mitigation measure. To understand the importance of urban planning role in risk reduction policies, it is fundamental to consider the strong relationship of interdependence that exists between urban planning and urban risk.

In urban areas, disasters and risk conditions are consequence of a series of factors that can significantly contribute to amplifying the effects of negative impacts of natural phenomena. In particular, not-well-studied activities of physical resources planning and management can cause a substantial increase in vulnerability and exposure to hazards and becoming themselves drivers for new risks. Above all, the insufficient awareness to risk issue and the lack of attention of the urban planning to geo-lithological/natural aspects and equilibrium has caused urbanization in areas with a high level of hazard with, sometimes, catastrophic effects.

If in case of slow natural phenomena (such as drought, climate change, environmental degradation, desertification, etc.) the complex urban system proves to be capable of modifying its main components (physical and functional) adapting, the urban structure and the different subjects involved (common people, stakeholders, professionals, decision makers). It also require the ability to adapt to very quick modifications of external (global socio-economic environment) and internal (social and organizational scenario) conditions.

Since, in an urban area, human beings (and buildings) are the most exposed elements to risks, the assessment of the exposure of the different urban functions is one of the essential features of Disaster Risk Reduction. As UNISDR well underline the “exposure of persons and assets in all countries has increased faster than vulnerability has decreased, thus generating new risks and a steady rise in disaster related losses, with significant economic, social, health, cultural and environmental impact in the short, medium and long term, especially at the local and community levels”. So, mitigate risks acting on exposure means remove, reduce and control the quantity and quality of exposed items presented in territorial sensitive areas.

Therefore, for a given urban context, the definition and the assessment of different Intended Land Use Changes allows understanding that is the optimal scenario to reduce exposure and then risk considering also urban and building compatibility. To reach this goal, it is essential to study the behavior (dynamic entity), location (indoor/outdoor, residence/work place, leisure and so on) and real distribution of population at an appropriate spatial (global/local) and temporal scale (night/daytime during year) (Exposure analysis).

So, for the description and evaluation of the multidimensional nature of human behaviour and therefore of its exposure, it is necessary the use of appropriated and complex methods, analysis and tools (statistical surveys, satellite imageries, Big Data, Crowdsourcing initiatives).

This methodology allows to evaluate the level of Exposure and Hazard of a given territory, and, therefore, to define the optimal Intended Land Use Changes to reduce urban exposure and then risk. 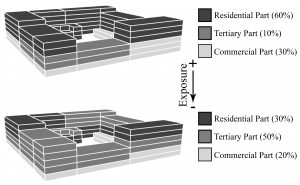 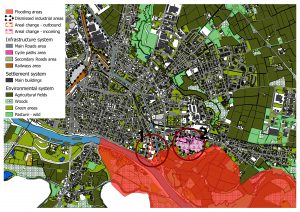